I've always been a firm believer that the Lord works in mysterious ways. He brings people into our lives for reasons that sometimes only He knows.When I first heard Josette Howard's story, I knew she was one of those people. I felt an instant connection to her and I couldn't shake the feeling that we were meant to cross paths.

I had known Josette for about a year before she told me that 19 years ago, her baby sister, Andrea Gail Parsons, who was 10 at the time, had gone "missing". She told me that even though it had been 19 years, her and her mom have never stopped looking for Andrea. They've never given up hope.

Josette's story unleashed an array of emotions in me, some of which I wasn't expecting to feel. I still can't exactly describe them all to you but I'll try.

I feel sad, of course. I want to comfort her family. I want to hug them and do things for them, like bake cupcakes and dumb trivial things that probably wouldn't help them but would make me feel better for some reason.

I wonder what would've happened if I never escaped my abductor. Would my family have continued to look for me after 19 years? Would the police have given up on finding me or would they keep investigating, like they did for Andrea?

A part of me feels happy and comforted by the fact that no one gave up on Andrea. No one forgot her even after all these years. I imagine it must have been tempting at times to just close the book and accept that she was gone and move on with your life but no one did that.

Her body has never been recovered and they never arrested anyone for the crime...until this weekend. Someone has finally been arrested for the kidnapping and murder of Andrea Gail Parsons.  Here's an article that was written on Friday, November 30, 2012.

"Major questions about the 1993 disappearance of 10-year-old Andrea Parsons remained unanswered Friday after a judge denied bond for the felon charged with kidnapping and killing the girl — questions including how detectives cracked the nearly 20-year-old case and where Andrea’s body could be.

During the 3-minute bond hearing, Martin County sheriff’s Detective Yesenia Carde, the lead detective in the case, said Chester Duane Price, arrested on Thursday for Parson’s murder and kidnapping, partnered with Claude Davis, long the prime suspect in the case, to abduct the girl outside the Port Salerno store where she had purchased potato chips and candy on July 11, 1993. Parsons bit Price on the hand as he forced her into a van, Carde said. The next morning, the men disposed of her body, the detective said.

Carde offered no clues as to how detectives were able to link Price to the crime, and prosecutors were equally cautious. Chief Assistant State Attorney Thomas Bakkedahl, said the Martin County grand jury that indicted Price met five times in the last two months and reviewed over 22,000 pages of investigators’ reports and hours of videos. Most homicide cases take about a half-day to present to the grand jury, Bakkedahl said. “There was an extreme amount of information,” he said.

Bakkedahl confirmed that Price was not given immunity before he appeared before the grand jury, a request that many suspects make before testifying. Also on the grand jury witness list: Davis, 77, who was arrested in 1994 on a false imprisonment charge but never tried. Davis, who now lives in a mobile home park in Stuart, has never been charged with murder in the case, but his initial arrest raises questions now as to whether his constitutional protection against double-jeopardy would prevent prosecutors from charging him now.

Parson’s mother also testified, along with at least six detectives — some now retired — and William Snyder, Martin County’s Sheriff-elect. The grand jury also heard testimony from Price’s step-father, Billy Brewer. In May 2003 Brewer unsuccessfully tried to get a restraining order against Price, saying his step-son rarely worked and when he did, he spent the money on crack cocaine. Why prosecutors asked Brewer to testify before the grand jury remains a mystery for now.

Price, most recently living in Haleyville, Ala., has an extensive criminal history with arrests dating to 1991, the sheriff’s office said. He voluntarily returned to the area to give testimony to the grand jury, sheriff’s spokeswoman Rhonda Irons said. At a news conference Thursday, retiring Martin County Sheriff Robert Crowder — also sheriff at the time of Parsons’ disappearance — said that a team of detectives was assigned last year to conduct a further review of evidence collected in the case.
“The resolve to find Andrea and get answers surrounding the circumstances of her disappearance has never wavered,” he said. More arrests are possible, Crowder said.

The investigation originally focused on Davis, a neighbor of Andrea’s, after he told investigators several stories of what happened. He initially told investigators that he saw several men stuff Andrea into a van the night she disappeared. Later, in secretly tape-recorded conversations, he told a close friend he had visions of Andrea being killed and dumped in the woods. Finally, Davis went to sheriff’s detectives and told them he remembered the truth – that Andrea died accidentally while collecting aluminum cans with him and that he left her body in a trash bin.

In 2000, Davis received a nine-year prison sentence in an unrelated case, but he was released from prison in 2003 and returned to Martin County. On Thursday, Crowder said Price and Davis knew each other, but declined to give more details. However, court records show Price was arrested in October 2009 and charged with assaulting Davis. The charge was later dropped.

Andrea’s disappearance on July 11, 1993 gained national attention. The case was featured on television shows such as America’s Most Wanted, and a Nancy Grace special episode “Nancy Grace: America’s Missing” that aired in February 2011.

Andrea was reported missing after she left her house in a mobile home community on Southeast Ebbtide Avenue shortly before 6 p.m. Her mother, Linda, was at work and Linda’s boyfriend at the time, Pat Daniels, was home with Andrea. Daniels told investigators that he was watching a program on The Discovery Channel and Andrea was bored. Andrea was given permission to go visit a friend and walk to the store.

Neighbors described how Andrea waved as she strolled along Commerce Avenue, then cut across the parking lot to Port Salerno Grocery. She bought two bags of potato chips and some candy. Daniels told investigators that he began to worry about Andrea as it grew darker outside. The family had no telephone and Daniels had no access to a car, so he scoured the neighborhood on foot.

Linda Parsons left work at Winn-Dixie at about 10 that evening and was stunned to discover he daughter missing. She drove through the neighborhood, stopping at the houses of Andrea’s friends. At 11 p.m., she called police.

As the 10-year-anniversary of Andrea’s disappearance approached, Linda said that she was still hopeful that her daughter would be found alive.

“I still think she’s alive out there somewhere. I have to believe that,” Linda said in a July 2003 interview with The Palm Beach Post.

Bakkedahl said on Friday he has no doubt that Andrea is dead but the fact that her remains have not been found should not pose any legal challenges. “I don’t need a body,” said Bakkedahl, who has worked on Andrea’s case for 18 years. “Trying a case without a body is mythically difficult but factually it’s not difficult.”

Neither Linda Russell Parsons nor her 31-year-old daughter Josette Howard or their extended family could be reached for comment. Linda Parsons posted stories about Price’s arrest on her Facebook page, which indicated mixed emotions about it.

“After 19 years, an arrest has finally happened in the abduction of my daughter. Everyone, please pray that this man tells us where Andrea is,” she wrote.

Bob Lowery, a senior executive at the National Center for Missing & Exploited Children, said he hopes Parsons’ prayers are answered. But with the passage of so many years he said it wouldn’t be unusual if Andrea’s body is never recovered.

The center has worked on the case off and on for years. It prepared a photo to show what Andrea would look like as an adult. Both Russell, who lives in Niceville in Florida’s Panhandle, and Howard, who lives in the Orlando area, feature the photo of Andrea as a 10-year-old and as an adult on their Facebook pages.

In 2006, the center sent a team of retired police to Martin County to work with law enforcement officers, hoping to solve the case. Recently, it began collecting Andrea’s fingerprints, dental records and DNA so an identification could be made if her remains are found. The agency is collecting similar information about all of the children it is tracking, he said.

Center officials had heard rumors that an arrest was imminent, but nothing official, he said. “We’re very delighted to hear the news that there has been an arrest,” Lowery said.

While he said he can imagine Parsons’ desire to recover her daughter’s body, he said she can take solace that Andrea was never forgotten. “It’s got to be terrible that they can’t put the child to rest,” he said. “But I think she should be a bit grateful to know that even after 19 years you have a law enforcement agency that stayed engaged.”

And, he said, Davis’ arrest doesn’t change Andrea’s status for the center. Until her body is recovered, her photos will remain on the center’s web site.

“The search for the child continues even though law enforcement has made an arrest,” Lowery said. “She will always be a missing child until her remains are found.” 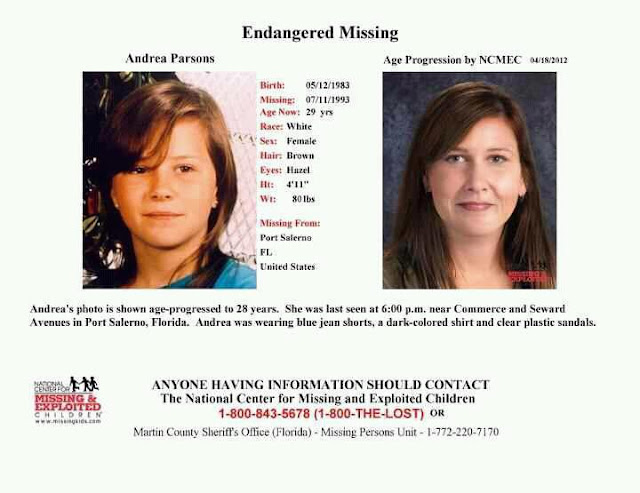 "Andrea's story just went global...It's your time Lil sis...we will find you...might not be the way we want...but soon baby."